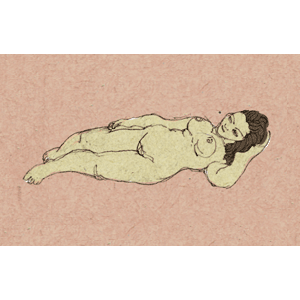 “On the next day some policemen gazed over the garden gate by accident, saw what they believed to be the naked body of a woman covered in blood and rushed into the house expecting to find the location of a murder of passion. In fact that was exactly what had happened ecause on that very evening I murdered Alma ….”
It was the Viennese artist Oskar Kokoschka who was under suspense. The exalted painter had chopped off the head of his former mistress Alma Mahler in his front garden. Before that he visited the Semper Opera with her. The desperate Kokoschka had a cloth puppet with the looks of Alma made by a puppet maker. It was this puppet that was seated beside him at the Opera and that he later ritually murdered during a night of binge drinking.
On some paintings by Kokoschka the Alma puppet is shown and three photos of her are also known.