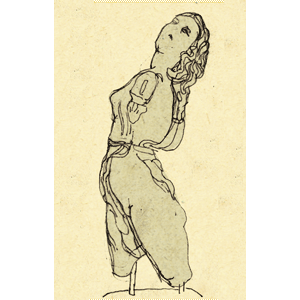 A Dangerous Walk in the Woods

This dancing girl is known as a fragment. It was introduced to art history as the Maenad by Skopas and is one of the most important sculptures in the collection of the Albertinum in Dresden. The maenads were also called bacchantes that means “furious”. Dressed in the hide of a deer calf, carrying torches and brandishing the thyrsos, a stick wrapped in leafy garlands, they danced and froliced through the woods in the entourage of Dionysos. In their ecstatic rapture they tore apart jung animals and ate them raw; one day poor Orpheus met the same fate.
Since antiquity meanads were often depicted; the Dresden maenad is a smaller copy of a Greek original dated to the 4th century BCE.