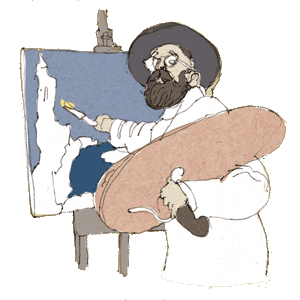 “The complexion, how it flourishes”

The colour of naked skin fascinated the painter Siegfried Klotz. With a palette-knife he captured it on canvas in his studio in the Academy of Arts, today named Hochschule für Bildende Künste, at Brühl’s Terrace. In this studio he piled up female nudes, portraits and scenes from the studio in the typical Dresden colour range. It was this enthusiasm for colour Siegfried Klotz instilled into is students. Until his death in 2004 he was an integral part of the Academy; whenever he was not painting he spent his time in one of the cafés. Even in the middle of winter he brought his easel out to Brühl’s Terrace; from there he painted his most beautiful vistas of the city covered in snow. Many painters from Dresden as well as Oskar Kokoschka and Otto Dix had already done so before him from exactly this spot and from the flat roof of the Academy building.