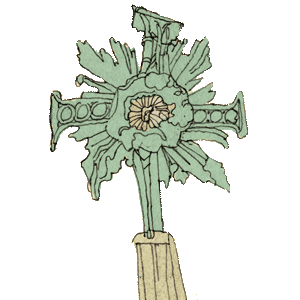 The new cross on the cupola of the Dresden Frauenkirche is a sign of reconciliation.
It was paintakingly copied from the original by the London silversmith Alan Smith. “The cross is a way to apologize that my father would approve of,” he said when handing over the cross in February 2000. His father Frank was one of the bomber pilots of the Royal Air Force in the attack on Dresden on 13th February 1945; this experience induced him to become a pacifist.
The original cross was recovered from the debris of the Frauenkirche in 1996 and is today displayed as a reminder inside the church.