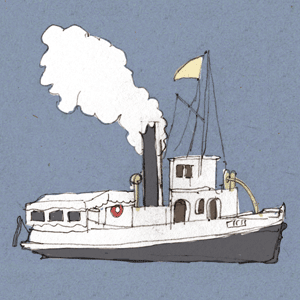 The Saxon Steam Navigation based in Dresden currently owns nine paddle steamers buit between 1879 and 1929. The sidewheelers with their historical wheel houses and their paddle wheels encased in paddle cases decorated with coats of arms are protected as technical monuments. Seven of them were built in the 19th century: City of Wehlen (1879), Diesbar (1884), Meissen (1885), Pillnitz (1886), Krippen (1892), Spa Town Rathen (1896) and Pirna (1898). Only the engine of the Diesbar is fired with coal and is under preservation order. The steam engine originally was built in 1841 for the paddle steamer Bohemia; it is regarded as the world’s oldest steam paddler engine still in use