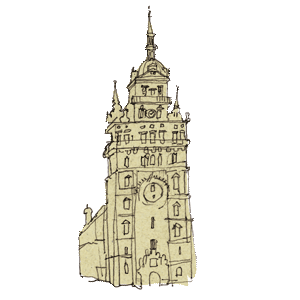 Church of the Holy Cross

There were times when city views painted by the famous court painter Canaletto took pride of place on the walls of most sitting rooms in Dresden.
Only 25 years old, the painter came from Venice to Dresden where he was made court painter with an annual salary of 1750 thaler. As a sign of his recognition he received a snuffbox and the royal couple became godparents of four of his children.
Canaletto treated many details of his paintings with artistic license; some buildings he showed as complete though in reality they were still under construction. One of his paintings shows the Old Market and the Church of the Holy Cross that united features of Gothic and Renaissance architecture. Years later, in 1765, he painted the same view again – the church is now in ruins, destroyed during the Seven Years’ War.
Today the Old Market is graced by a Neo-baroque building – the latest reincarnation of a church that was jolted and battered by history.