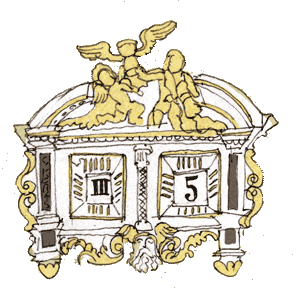 The King of Saxony is said to have had it installed because the ticking of pocket watches in the audience got on his nerves. In 1841 the first “Five-Minutes-Clock” was installed above the stage in the Semperoper – a new digital display indicating the hours in Roman, the minutes in Arabic numerals. True to its name it progresses in five minutes intervals. The clock was replaced several times, after the fire of 1869 as well as after the devastations of the Second World War.
The clockmaker to the court, Johann Christian Friedrich Gutkaes built the original clock for the Semperoper in 1841; his apprentice and son-in-law four years later opened his own workshop in Glashütte this laying the foundations of the famous Saxon clock-making tradition.