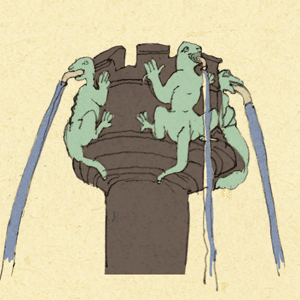 Frogs and geckos are crawling on pillars an arches; they serve as waterspouts. Four religious figures, among them John the Baptist and Saint Elisabeth, face the four directions and safeguard the city of Dresden.
The cholera raged in the region in 1841-42 but Dresden was miraculously spared. Baron Eugen von Gutschmid was so relived that amongst others he commissioned Gottfried Semper with the design of the so-called cholera fountain. Against his own conviction Semper followed the wishes of the sponsor and designed the fountain in a neo-Gothic, cathedral-like style. Although dainty and elegant, the fountain in the centre of the Postplatz eventually became a traffic block. In 1927 it was therefore moved to Sophienstraße