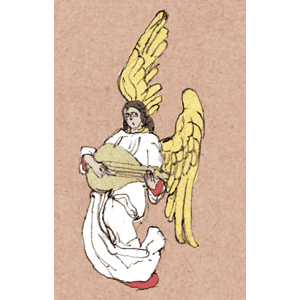 Musical instruments can quite often be found in the hands of angels. An entire orchestra of angels buzz around the Virgin Mary in the Dresden Cathedral, and one of them hold the queen of instruments, the lute.
Early forms of the European lute may have been brought to the continent by the crusaders. They may have reached Central Europe even earlier via moorish Spain or the Byzantine Empire that shared borders with Persia.
The name lute is derived from the Arabic “al-oud” meaning “the wood”. The wooden oud is a common instrument in the Arabic countries – on its way to the Occident the letters of its name obviously got a good shaking..