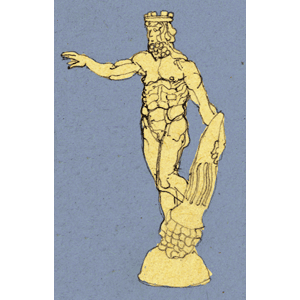 Out of his cornucopia a muscular Hercules pours good fortune over Dresden. The god himself is covered in 520 g of beatgold. Since 1908 he overlooks the city from the tower of the city hall.
Ewald Redam was lucky as well in 1907 bearing a gold medal on his chest. Redam was incumbent Saxon champion in heavy weight and oktathlon; he made an additional income as an artist’s model in Dresden. Amongst others he posed for the Herkules created by the sculptor Richard Guhr. Redam, the son of a grocer’s couple, took up power athletics (Kraftsport) at an early age. He trained at the “Kraftsportverein Dresden-Plauen” and later at the “Verein für Sport und Körperkultur 1899” (Association for Sports and Physical Training) in Meißen. The variety show he ran with his wife, the “Four Redams Power Athlets”, toured the world for a few years. In the colossal statue of a man throwing a ball Redam also stands in front of the German Museum of Hygiene in Dresden.